It all started with us arriving at Tiree and our plans going wrong due to the weather and so I had to spend my time at the Tiree Tech Wave that was taking place at the Rural Centre. I was at a loss as to what to do therefore I decided to make something and after some thought I came upon an idea of making a board game. 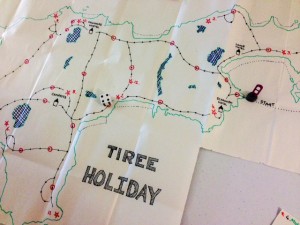 Firstly I wanted to base it on Tiree as I was there so I drew the outline of the island. Meanwhile I was trying to decide what the game could be like. The second thing that hit me was to make a game that included traveling around the island. My next thought was that you would have to collect island wildlife but then I had a more advanced idea: you could visit different places of interest on the island. I imagined being a visitor and thought about where you would arrive, where you would stay and where would be an interesting place to visit. And with that idea I got hold of a guide/map and marked off places that I could use in the game. I decided that people would arrive by ferry and chose 4 places to stay called “Bases” and 12 exciting places to visit that I made sure were spread out across the whole island. With that knowledge I drew these places on the map and wrote them on a piece of paper and numbered them randomly. 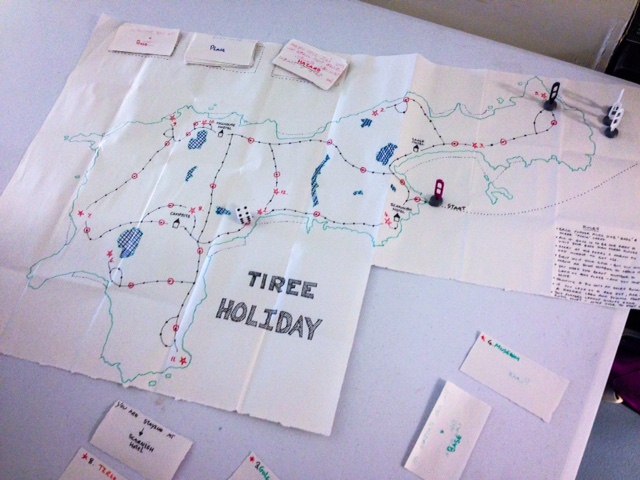 Next we connected all of the different places by roads on which I drew little dots to mark where you could move during your turn. Finally I had a quick tester game and I thought that it was too easy so I added “Hazards” by drawing a red circle around a few of the dots. I found it hard to think of Hazards because I wasn’t local so I went round and asked some people about hazards and together we came up with quite a lot. For example: Alan suggested time traveling Vikings!!!!! 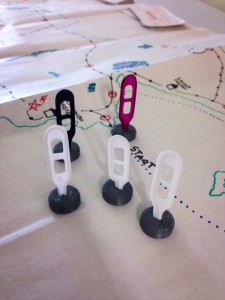 We played a few games and changed the rules until we were happy with them and then we wrote them down. For game pieces, the first thing we tried was tea-stirrer tops stuck into polystyrene bases made from disposable cups. But unfortunately these makeshift playing pieces weren’t stable and kept falling over however, since we were near so much technology, Steve offered to 3D print some precisely measured bases for our tea-stirrers and they looked awesome!!!!!!!!!!

And with that my newly named board game called “Tiree Holiday” was completed.

Here are the rules for the game: