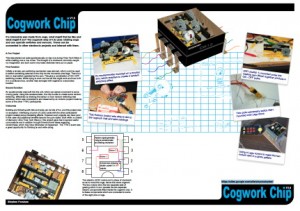 If a microchip was made from cogs, what might that be like and what might it do?  The cogwork chip (V1.0) uses rotating cogs and can operate switches and sensors. These can be connected to other electronic projects and interact with them.

This idea started out quite spontaneously on day one during Tiree Tech Wave 2 while chatting over a cup of tea. The thought of a clockwork microchip caught my imagination and soon some very basic sketches were put on paper.

Initially a simple cam switching mechanism was planned, which could be used to switch something external to the chip via the connector pins /legs. There is a twin or dual switch operated by the cam. This give a combination of ON / OFF switching modes. While trying to work out how all this might work and how to fit it in a cardboard box, another idea emerged with regards to a secondary function.

An accelerometer was built into the unit, which can sense movement to some moving parts. Using this accelerometer, the chip is able to create some random switching. Effectively by shaking the sensor a more random switching was achieved, which was connected to and observed by an Arduino project made by some of the other TTW 2 participants.

Building and tinkering with bits and bobs can be lots of fun, and this project was no exception. Interfacing a bunch of LEGO parts with the other participants’ project created some interesting effects. However such projects can have (and in this case did) additional benefits beyond the pure object. Built within a context of discovery: AKA Tiree Tech Wave 2, this project gave rise to several useful convocations and in addition brought forward some ideas regarding randomness, which may have otherwise not happened. The TTW 2 event was a great opportunity for thinking by and while doing. 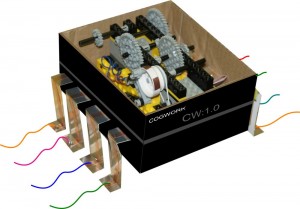 Two electric LEGO motors act in place of clockwork so as to move the cogs, hence the name cogwork. The two motors drive the two separate sets of gearing which in turn operate the two separate electric components fitted inside the cogwork chip. It is these components which are connected to some of the eight pins or legs.