The third Tiree Tech Wave took place over the weekend 22-26 March, when we thankfully had the sunniest weather for months, and we took the opportunity of the good weather to have some long walks on the beach, and a few people surfing and swimming, as well as long sessions huddled hacker-fashion over computer screens and soldering irons.

Participants for the three TTW events to date have come from as far afield as Madrid, Eindhoven and Malaysia, but also from Scotland and Tiree itself.  Probably the most well travelled (although not furthest distance) participant at TTW3 was Nick a computer programmer who has been on the road for 8 months, living in tents, cabins and under the stars, and all the time coding on beaches and fell-side powered by solar panels on his bicycle trailer.

The Tech Wave has a minimal fixed agenda, as the aim is deliberately to take those coming out of their normal deadlines and timetables, and instead have the freedom to explore ideas together and pick up some of the clarity of mind fostered by the wild environment and appreciated by the monastic traditions of study at the western fringe.  Instead people pick up projects they have long wanted to do, but not had time, or follow-up ideas that come up during the weekend sparked from conversations with others or engagement with the local community.

Island time always seems to run at a different pace; to celebrate this a small web site (https://tireetechwave.org/TireeTime/) is being developed to remind us that the sun does not care about timezones or when the clocks go back (anyone spotted the sun stopping in the sky?).  Each town has its own time given by the sun and Tiree is officially, scientifically and chronologically 1 hour 27 minutes and 30 seconds later than British Summer Time..

On Saturday TTW went public with “Futuremenders“, a talk and workshop led by art activist and mending proponent Jonnet Middleton of Lancaster University and supported by a grant from the Tiree Community Development Trust Windfall Fund.  Quoting Jonnet’s web site (http://www.futuremenders.com/) “Futuremenders is the lifelong project of UK artist Jonnet Middleton who took a pledge in 2008 to acquire no more clothes, ever.” 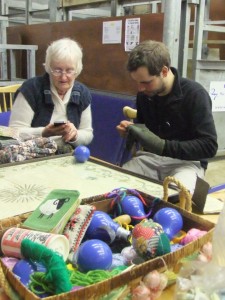 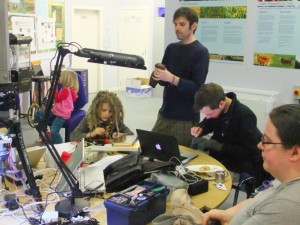 Jonnet introduced the workshop explaining how mending was an activity that bridged the textile-related activities that are popular on Tiree with the technology re-purposing and re-making at ‘hacker’ events.  After Jonnet’s talk describing some of her own technology and textile inspired artistic interventions, we all set about practical mending and talking about mending.  Socks were darned, a toy pushchair repaired and Alan, the organiser, found that even his bum-bag zip worked once more.  Technology and textiles intermingled and a hot soldering iron was brought to bear on another recalcitrant zipper.

As TTW3 drew to an end everyone was already thinking forward to TTW4 in October and maybe a ‘micro-wave’ in the summer to get some equipment installed in preparation.

It has been a fun event, but also one that brought the searing edge of high technology to the island community and the peace and space of the island to the visitors.