Prof Cathy Treadaway and Helen Watkins from the CARIAD research team at Cardiff Metropolitan University returned to Tiree during the October 2015 TTW to run a Hand i Pocket Funshop with the Tiree Community and Taigh a’ Rudha care home. They were assisted by Dr Wendy Moncur from University of Dundee, Dr Keireine Canavan and Chris Dennis from Cardiff School of Art and Design.

Cathy and Helen were participants at the March 15 TTW when they linked up with Jane MacDonald from the Taigh a’ Rudha care home and planned a return visit to Tiree to run a funshop in collaboration with the Tiree Tapestry Group. The aim was to encourage the Tiree community to get involved in making sensory textile pockets for people with late stage dementia.

The funshop was held as part of TTW10 on Saturday 24th October 2015 and was funded by the Argyll and Bute Health & Wellbeing Network fund and the Tiree Community Windfall Trust. The event was a great success and well attended by the Tiree community, including families with children and older people. There was support for the event from Azheimer’s Scotland and Sue Pagan, Dementia Advisor from the organisation, gave a presentation about dementia and encouraged participants to sign up to become Dementia Friends during the afternoon. 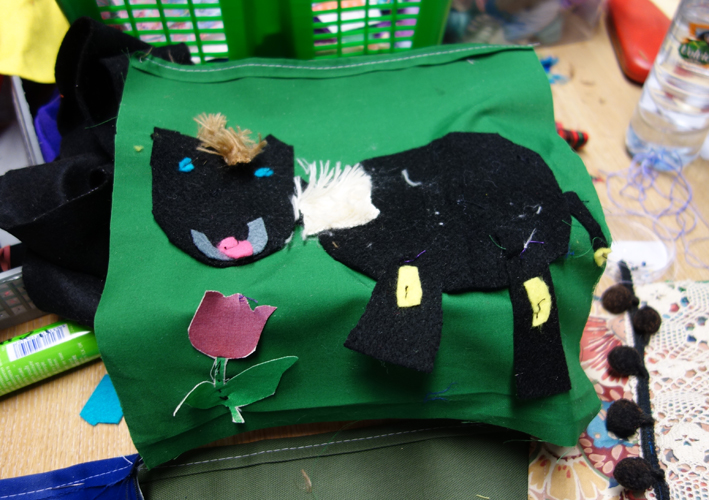 Each participant designed and stitched a sensory textile pocket to give to someone with late stage dementia using recycled fabrics, buttons and threads. Pockets were brightly coloured and stitched with imagery and patterns ranging from cup cakes to Tiree wildlife. Most of the pockets created on the day have been donated to the Taigh a’ Rudha care home for use with the residents and others will be given to older members of the community living with dementia. The Tapestry Group and talented members of the community, including local TTW participants, contributed their expertise and textile craft skills to the making process. 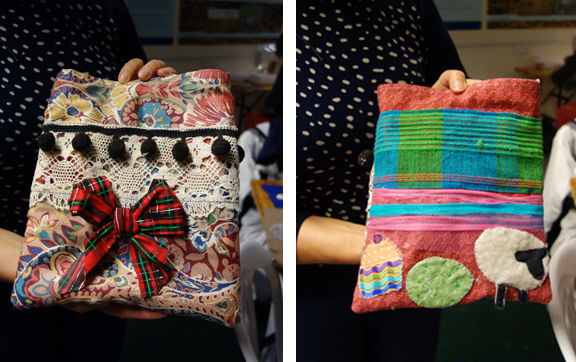 Hand i Pocket funshops were developed in 2014 by Professor Cathy Treadaway in collaboration with Dr Gail Kenning from University of Technology Sydney as part of the HANDS international design research for dementia research project. This work is undertaken with the support of Alzheimer’s Society, Alzheimer’s Australia, Age UK and Dementia Positive.