An experiment in personal cartography.

Participants at TTW-2 (Nov 2011) were given a sheet of paper and Alan asked them to draw their journey to Tiree.   The drawings were as varied as the participants 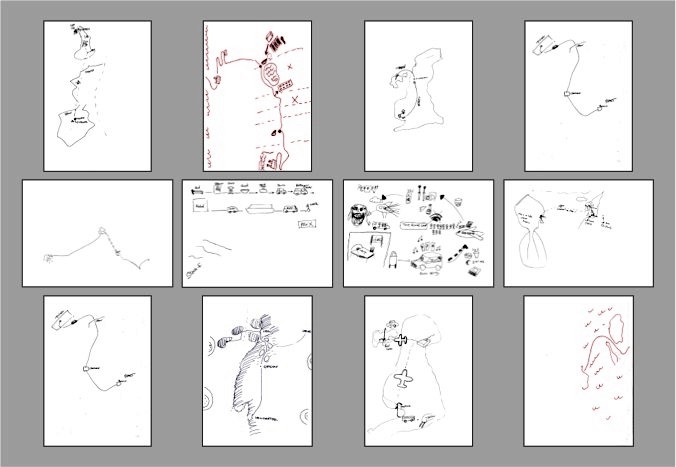 This was something I had first tried at CVE2000 in San Francisco as part of a keynote “Welsh Mathematician walks in Cyberspace“.  During that talk he posited a continuum of kinds of potential drawings, with five broad classes:

All the drawings then, and at subsequent talks where I had done the same exercise fell into these classes, with one exception ((the exception was an extreme kind of episodic depiction where the incidents were drawn either side of a centre line as if one were looking along the journey, with tableaux to either side.)), but this was the first time the drawings had been collected afterwards as a permanent record.

The first four are examples of cartographic (isomorphic), all truing to be, as far as the graphic skills of each participant allowed, like the sort of map you would see in an atlas.

The first to show the same journey from Cardiff to Tiree, although note that while the underlying land is drawn close to scale, the maps are decorated with small pictures showing the methods of transport (road, rail, plane), even a bed for the overnight stay at Glasgow airport. 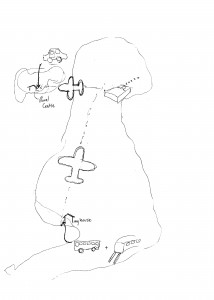 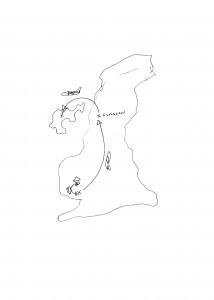 The second two show different journeys, one from Spain and the other just the ferry from Oban to Tiree because the participant had stayed a night at Oban and so interpreted then ‘journey’ as just being the last day’s travel. 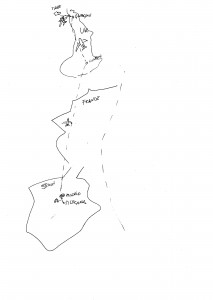 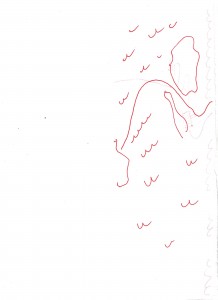 The next two are examples of cartographic (homomorphic) drawings. On the left is the journey from Lancaster to Tiree, but note how the islands between Oban and Tiree are drawn in ‘exaggerated’ scale. Similarly the drawn on the left shows a joinery from New York to Tiree, but again the UK is exaggerated in scale compared to the USA. In this map London and Glasgow are shown as well as New York and Tree, as there were flight changes at these airports. In addition Southampton and Eindhoven are marked as ‘not here’ as the participant who drew this had recently moved to work in Eindhoven after having been a student in Southampton, but on this journey had been in a conference in NYC just previously.

Again, points of personal significance are included, these are not simply drawing a line on a standard map. 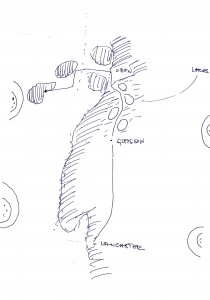 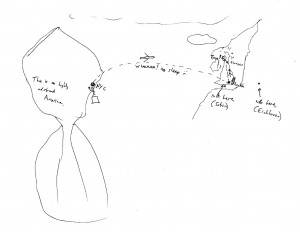 The next three are examples of schematic drawings, there is some attempt to match the general directions of movement, but with few surrounding features shown except where these are significant for the journey, such as named places (Lancaster on the right) or iconic drawings (Loch Lomond towards the top of the left). The image on the bottom is particularly schematic, but focused almost entirely on the turns on the way and few identifying images, to the extent that I am not entirely certain which way up it goes. I think the portion on the right is taking the train at night (moon) and the sun on the left is because the sun rose while on the ferry from Oban to Tiree. 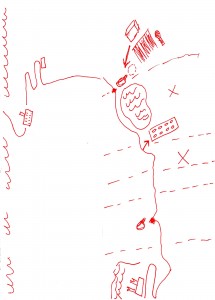 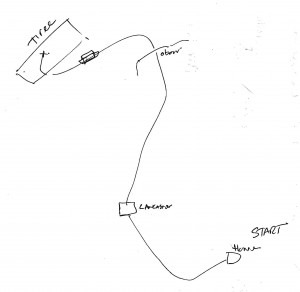 This is a classic example of a linear joinery drawing, with the line bent because the page is not wide enough, not representing and physical turn during the journey. Not only is direction linearised, but also distance and time normalised, with each mode of transport given equal space irrespective of the amount of time, or distance travelled in each. 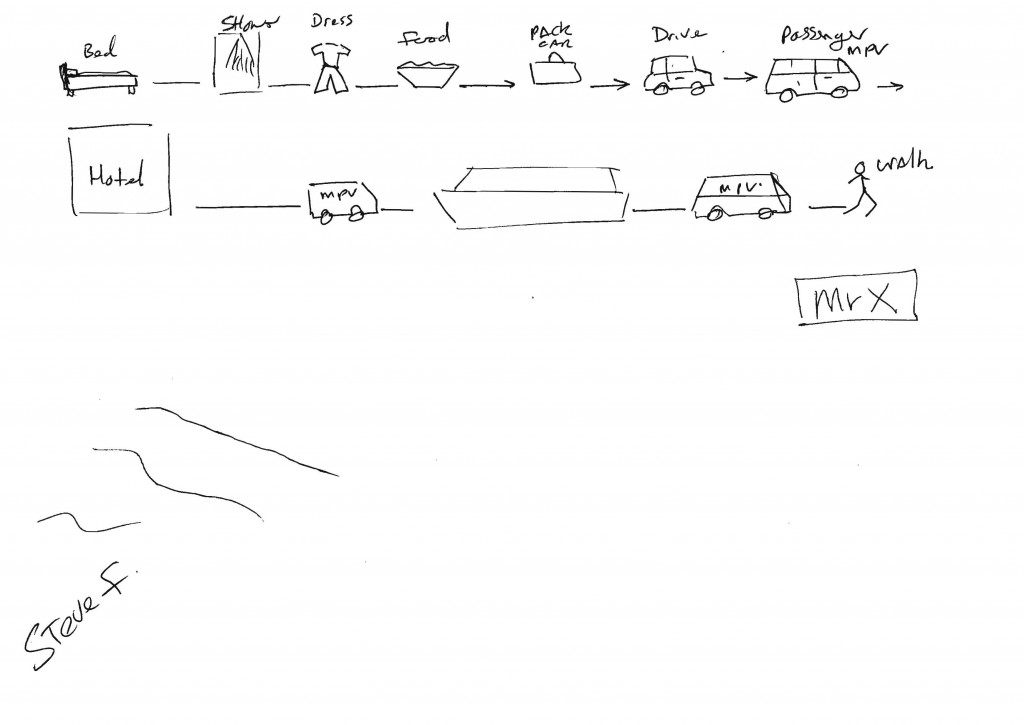 Finally, while clearly having a linear nature, this last drawing is strongly episodic.  Like the last drawing (and many others) the modes of transport are clearly drawn, but there is s truing focus on things done on the way: food eaten, sleeping on the plane, the people at the Rural Centre, a cow in the landscape (or maybe the Cobbled Cow cafe?) and even Alan himself. 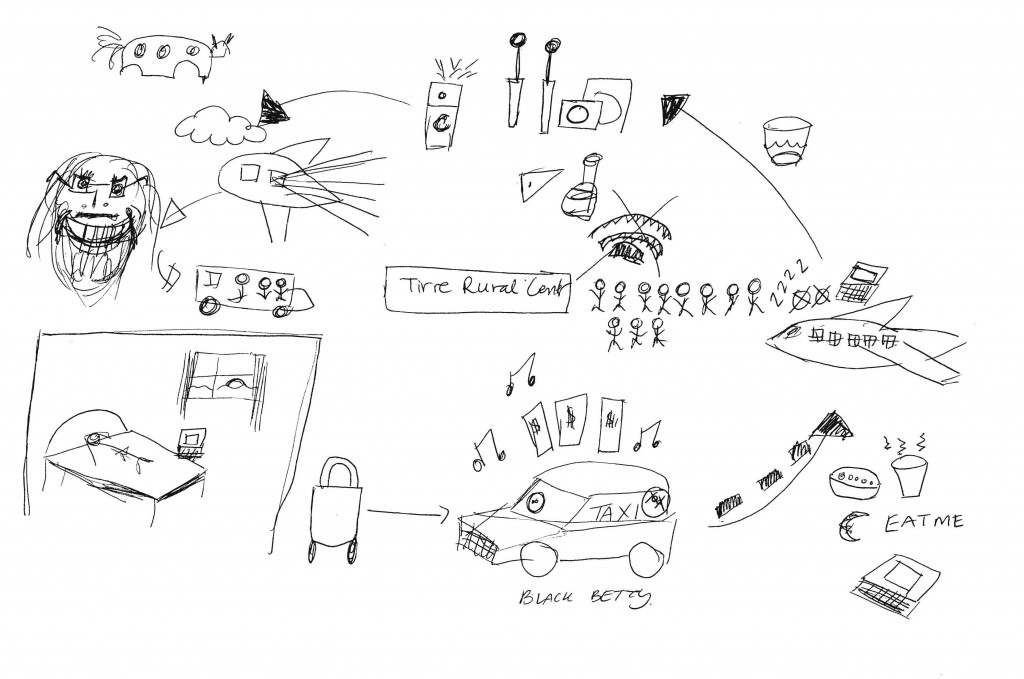 In all these joinery drawings, even the most cartographic, there is a strong emphasis on the places and events of significance along they way. This reflects the need for nth written and digital cartography that reflects personal and community values, which I have written about elsewhere.