Jakub Dostal, University of St Andrews, and Alan Dix, Talis and Lancaster University, report how designers, academics and professionals met on a remote island to make devices and hack technology.

Imagine spending five days with no pressure of deadlines, no committee meetings, no rush and stress of city life, just time and freedom to work on anything you want and hack away on interesting problems with a group of like-minded people in the beautiful, peaceful and calm environment of one of the sunniest places in the UK. This is what Tiree Tech Wave was like. 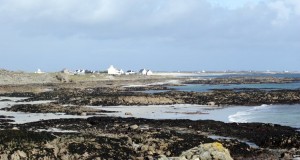 The first aim was to bring together, on the island of Tiree, researchers involved in developing and using high-end technology, and to give them freedom to work on projects that might otherwise be put (or have already been put) on the back burner because of the pressure of life and research commitments.

This meant that when everyone arrived on the island, there were several participants from Scotland, some from other places in the UK and even one from as far away as Malaysia. Moreover, their backgrounds varied even more, from the building trade to biochemistry and linguistics, while their interests included music, mathematics and photography. An interest in computing, technology in general and the relationship between the human and the machine were a given. However, the diversity of ages, personalities, interests and backgrounds did not work against them, quite the opposite. If anything, it resulted in a richer experience for everyone due to the different perspectives and expertise that each participant brought to the mix and shared. 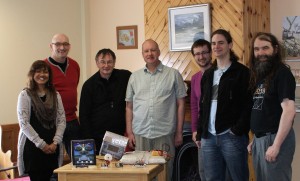 A further aim of the event was to put participants in touch with members of the local community, to raise awareness of local issues and provide inspiration for possible projects on one hand, and for the members of the community to hear ideas about how technology might be able to help them. For example, the participants met with local fisherman and fire chief Sandy MacIntosh, who talked about the way fishing, as well as the life of everyone on Tiree, may change because of the Argyll Array (currently the largest wind turbine array to be planned in Scotland). Another meeting was with Clare Jones, who discussed healthcare issues, particularly focusing on caring for the elderly and the challenges the island is facing there.

So the possible projects ranged from weather forecast syndication to instrumented home mats for fall detection. Because of the time and resource constraints the participants were facing, it was decided that the main group project would be the ‘Fish-Van-Open detector and visualisation’ (see mini project: “The Fish Van that Tweets”).

This consisted of an Arduino board with a tilt sensor fitted to a mock-up of the fish and chip van hatch, which sent a tweet via SMS (emulated by a helpful stooge) when the hatch opened or closed. The tweets contained known phrases (‘#tireefishvan open’and ‘#tireefishvan closed’), which were detected using the Twitter API by a small processing app on another internetconnected computer. Finally the presence of the key tweets was used as a trigger to control a second Arduino board in a small model fish and chip van. The board controlled a small motor, which opened the hatch on the model van when the real van was open. This might be on the shelf of an islander who then knows when to go to get supper, or maybe bought by a visitor to give them an ongoing sense of connection to their holiday paradise when back home.

While the choice of the group project was unusual, it demonstrated several important aspects of the interactions at the event. Even a seemingly simple project like this generated discussions on a wide range of aspects, covering anything from the low-level hardware requirements that would guarantee low cost for a working solution, to the broad social impact on human interaction on the island that the introduction of a system like this might cause. 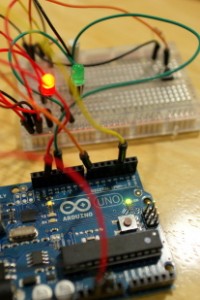 Finally, let us not forget the other projects that were finished by the time the event ended with an open ‘show and tell’ session for islanders. They included a virtual dog, a robot arm and a pressure-sensitive mat, and of course a working prototype of the fish-and-chip system complete with a model van that opened and closed based on the Twitter messages.

All the participants left with plenty of ideas of things to consider and explore. To illustrate the enthusiasm Tiree Tech Wave generated, even before they left, they were already discussing ideas for the next Tech Wave and how to make it an even greater success.

If you are interested in learning more about Tiree Tech Wave or participating in the future, visit tireetechwave.org for information, images and contact details.

One thought on “Interfaces article”