In an age dominated by metrics and objectives, the whole idea of the Tech Wave is NOT to have fixed outcomes.  What happens depends on who is here and how ideas spark.  However, this open agenda does lead to remarkable things happening.

Many of the benefits of this will be, by their nature, pervasive but diffuse: clearing the mind, learning new things, going back to day-to-day work refreshed and re-enthused.

These intangibles, while anathema in a world of mensuration, are the most important ‘outcomes’.  However, there are also many tangible outcomes.

The event has lead to numerous cross-site visits, talks, and internship.  New collaborations have begun, some leading to publications, or new projects.  PhD students and others have piloted methods and demo-ed prototypes.  Some people have used the event as an opportunity to finish a piece of work away from the distractions of the office, spending some time in discussions or activities, and some cocooned in ear-phones.

One of the outputs of the Techwave program have been the long-term collaborations which have a arisen as a result of people meeting at the Techwave. One such collaboration has emerged between Alan Chamberlain and Konstantinos Papangelis. This has resulted in a range of outputs and Alan mentoring Konstantinos. One key output has been the recent publication of an article in ACM ToCHI. The article is available below and is Open Access (Free to download).

Clare Hooper had been to a Tiree Tech Wave a few years earlier, so when she began to organise the ‘Re-Thinking Architecturally” workshop for the EINS, the European Network of Excellence on Internet Science, she thought of Tiree.  The workshop brought together economists, architects, lawyers, technologists, and policy advisors to Tiree to discuss the future of the internet.

EINS page on the workshop
Alan’s blog about attending 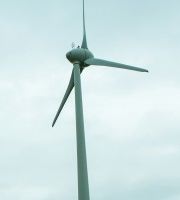 On Supply is the last ‘sprint’ of the EPSRC funded Catalyst programme.  Inspired by a chat during a run on the beach, Maria Angela Ferrario went back to Lancaster and together with Adrian Friday brought together a  collaboration of Lancaster University, Goldsmiths, Tiree Trust and independent researchers to address the human and motivational issues of matching demand to renewable energy supply.  The work went on to win a best paper award at the CHI 2015 conference in South Korea.

More about the On Supply project.

Konstantinos Papangelis, a PhD student at the dot.rural research centre in Aberdeen,  used a Tech Wave to run a series of  focus groups under the title ‘Stranded?‘.  His PhD is about issues of disruption in rural transport, and Tiree was one of his field locations.  While at the Tech Wave he met Alan Chamberlain, from Nottingham University, the ensuing collaboration has included  a paper presented at COOP’2014.

Clare Hooper used her TAPT experience evaluation tool during a Tech Wave (to evaluate the Tech Wave!).  Subsequently she was invited to give a talk on her work at HighWire, one of the centres of UK Digital Economy research at the boundary of technology, design and management.

Clare’s blog about her talk. 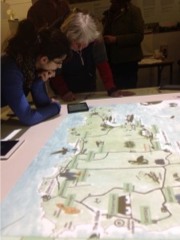 At an early Tech Wave Alessio Malizia then at Universidad Carlos III de Madrid., demo-ed a low-cost desktop touch-table developed by his PhD student Andrea Bellucci.   As a direct outcome of this Andrea spent a three month internship at Cardiff School of Art and Design, during which he visited Tiree and installed a prototype large projected touch table (which involved clambering up ladders to a 5 metre high platform!).  During a subsequent Tech Wave, Alesssio  and Alan Chamberlain collaborated in a study of data visualisation for rural communities leading to a short paper at the Ubicom 2013 conference and further publications in progress. 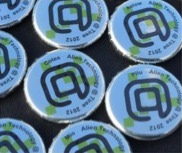 Stephen Foreshaw (who has been to every Tiree Tech Wave!) used one of the Tech Waves as the first pilot of an Alien Technology Workshop as part of his work on trans-disciplinary design methods and Physical-Cyber Environments.  This work forms a central part of his PhD and reported at the British HCI Conference in 2012.