time is where the sun is

The sun rises and sets because  the earth is turning.  The further west you travel,  the later the sun rises.

This was perhaps most  clear in 2000 when TV cameras followed the New Year and new Millennium New Year’s celebrations as they were celebrated.  First there was Oceania and Australia, with fireworks over the Sydney Opera House, some hours later the Twin Towers in Kuala Lumper were lit up, India, Pakistan, the middle East, then into Europe, and theUS, before some of the eastern Pacific Isles were the last to celebrate their Millennium.  If you have ever experienced a solar eclipse, you will know that spine tingling feeling as you see the shadow of the moon race to you from the East, but it is not the moon’s shadow moving, but again the earth spinning under the heavens.

At 12 o’clock the  sun is at its highest  in London, but it is 27 minutes and 30 seconds later before the sun is highest in Tiree, so when the clock says 12pm in winter we treat it as noon, even though it is actually 12:27 before the sun reaches it’s highest point over the seas towards Jura. 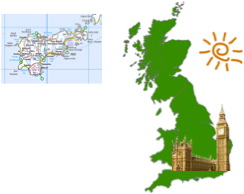 In the summer things are more extreme as summer time means it is 1pm at noon (when the sun is highest) in London and  a full 1:27pm before the sun hits its zenith in Tiree.

After the sun has set  in midsummer, there is still a glow in the sky until midnight, you have to wake in the middle of the night (or stay up) to see a really black sky.  But the darkest is not 1am as it is in London, but 1:27, when the sun is truly at furthest from our skies and rising high in our antipodes (in the cold Antarctic seas, far south of New Zealand).

then it was standardised

Watching the shadow of the sun and using simple sundials were probably the earliest ways in which humans tracked time.  The sun’s shadow is at its longest, and on a horizontal sundial, pointing exactly downwards when the sun is at its highest.

Once every clock tower showed it’s own time; 12 o’clock was when the sun was high, just the same as the sundial.  You ordered your life by the church or town hall clock, and if you had a clock or watch of your own, you set it by the time on the clock towers.

For some purposes, most importantly finding your longitude while at sea, it was important to have clocks set permanently to Greenish Mean Time.  But it was exactly that a ‘mean’ or average time, not ‘the’ time.

Then the railways came  and wanted the same time  … everywhere.

While you lived and worked in a single town, or travelled slowly by foot, horse, or carriage, this all worked fine.  Even as industrialisation crept across the land, you didn’t start work at 6am London time, but when the horn sounded at the  local mill.

But railways had timetables, and the drivers and conductors on the train needed to know whether they were ‘on time’ or not.  Converting between London time, Bristol time and Cardiff time became increasingly difficult, and so the idea of standard times began, initially company with its own time, and then fixing on a single time. 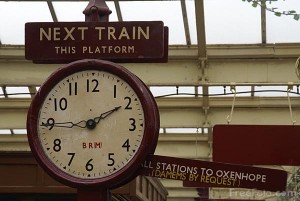 Of course this affected not just the railways, but everything.  Latter we got Radio 4 pips at midnight, and Big Ben on News at Ten, computer calendars and atomic clocks; all telling us that time matters, but it is not to do with the sun and nature, not to do with our bodies and life, but what it says on the clock.

let’s reclaim   our own time! 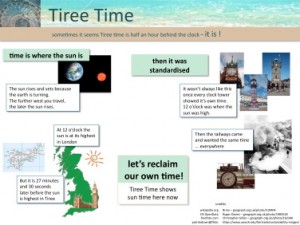